Prior to trying the following Piraxix deck out I had previously only played him about 2 times over the course of the last year. Piraxix is not one of those heroes that particularly interest me, so I though I would try something different with him from what everybody else was doing. This deck does not seek to mill the opponent but instead uses a combination of a steady stream of allies, cantrip drawing, as well as other on summon and on discard effects to control the board and win the game.

Piraxix’s ability is very unique to Shadow Era. Piraxix is the new Elemental Class hero that was introduced in Shattered Fates. At times, his hero ability can be very unreliable or inconsistent, but by using a high count of allies you can create a bit of consistency with the damage output to either assist with board control or damaging opposing heroes. Generally people like to play Piraxix as a mill style hero using a combination of both allies and control cards. This can leave Piraxix somewhat vulnerable if the wrong cards are discarded or drawn. This deck has some of the same drawback, but because we are playing with a very large number of allies it creates some consistency and tempo that helps Piraxix to survive. The deck is almost entirely allies which can broken down into two groups types: On Summon and On Discard. Each of these groups creates a different type of tempo which Piraxix can use to help him win the game. When 21 ally is discarded, another is generally available to take his place and so the tempo cycle continues. Constantly playing allies puts pressure on the opponent to have answers. 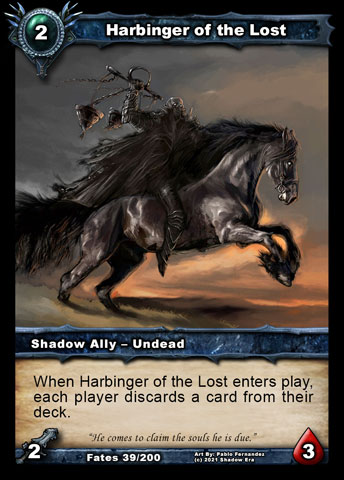 Harbinger of the Lost is pretty amazing in this build. When you summon him there is an almost guarantee that he will get his +1/+1 summoning bonus from discarding an ally because there are so many allies in the deck (37 out of 40 cards). This makes for a great turn 2 ally, which can only be made better if he happened to discard a Brimstone Devourer (deal 3 damage to opposing ally) or a Reactorary (a free 3/2 ally). 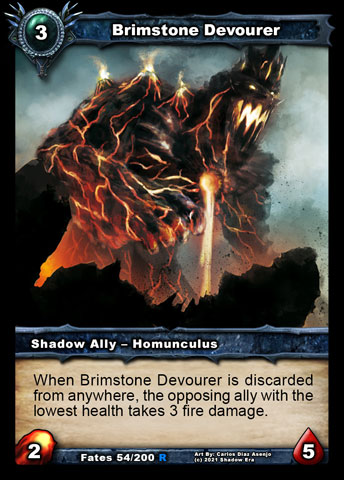 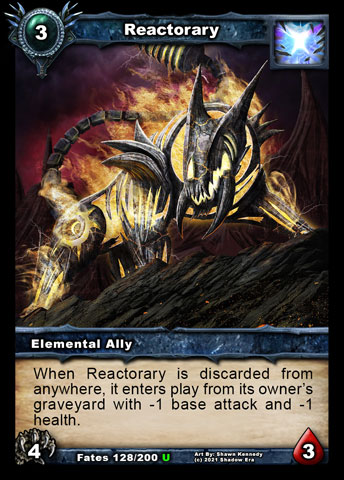 Brimstone Devourer and Reactorary are intended to be played as primarily discard options where you will receive the most benefit. Being able to summon an ally for free or deal 3 damage to an opposing ally is a fantastic way to create tempo with Piraxix. If you play with Meat Wagon you can have the benefit of always knowing what your top card is to assist with maximizing the timing of deck discard options. 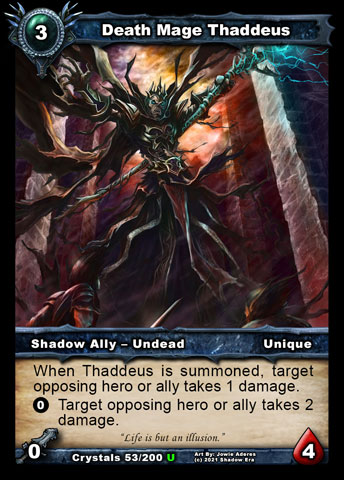 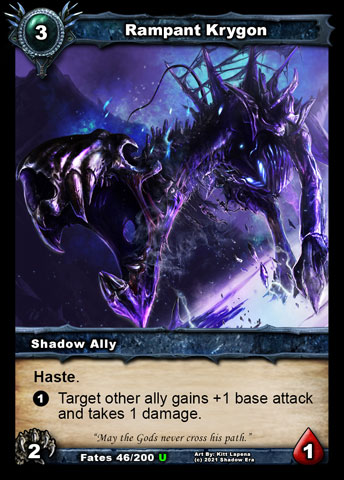 Rampant Krygon and Death Mage Thaddeus are both damage sources from the hand. The bonus is that they also add a body to the board. These type of allies are important for Piraxix because his hero ability damage can vary per use and these guys can help finish off the remaining damage if any. 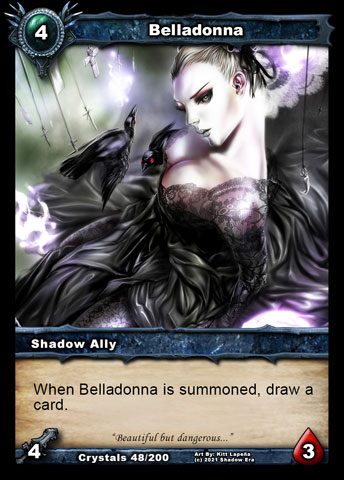 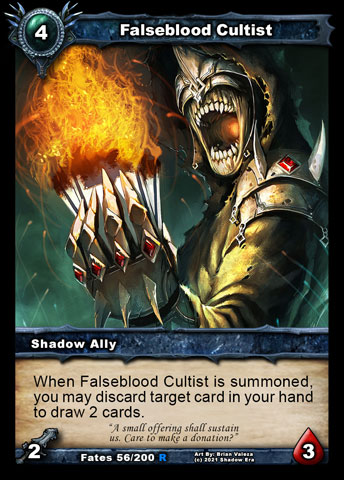 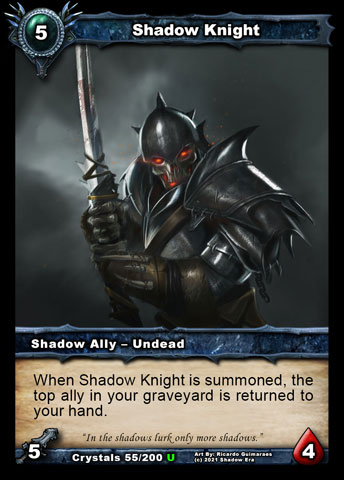 The draw for this deck all comes from playing allies. Belladonna is ok but not amazing in this build. The 2 hp really puts her in death range of almost every ally, but here 4 attack makes her a threat that can not be ignored, she also helps as a nice filler for drawing in this deck feeding the theme. Falseblood Cultist is amazing for being able to not only assist with the discard theme but also drawing multiple cards. He also helps keep the tempo of the deck up by assist with putting bodies on the board, possibly control damage with Brimstone Devourer. Shadow Knight is always amazing, being able to loop himself. Generally the only cards I try to retrieve are Shadow Knight (for looping) and Rampant Krygon. You need to pay attention when you are wanting to summon your Shadow Knight as if you perform a discard your top card will change and may be a less optimal target for retrieval. 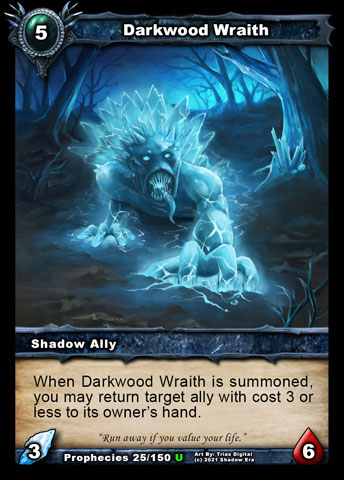 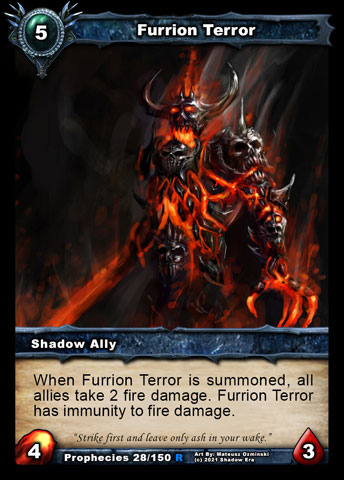 Darkwood Wraith and Furrion Terror are some of the other on summon allies that I am experimenting with. Furrion Terror is a great ally, but not necessarily great for this build. His summon ability damage is great for helping keep the board under control, but it usually comes at a cost of killing some of your allies which have low health, he probably would not make the final build as I find I am often holding him in my hand and not playing him. Darkwood Wraith is an excellent ally for 2 reasons. First he is able to help keep board control and helps stall while you are waiting for your hero ability to recharge. Second he has high health which is something the deck is generally lacking. 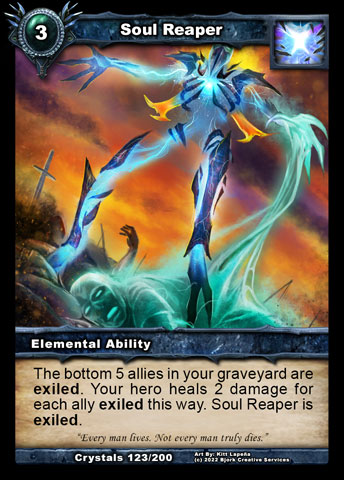 The lone non-ally card of the group is Soul Reaper. In this particular deck Soul Reaper has tremendous value as each ally in the deck basically counts as 2hp and there are a total of 37 allies which can total 74hp in the right circumstances. I am running 3 copies to just in case some of them get discarded. It is an amazing card in this build to extend the games while you are baiting the board or waiting for your hero ability to re-charge. Timing of plying Soul Reaper is very important because when you use it wipes your entire graveyard of the allies. You can time using prior to Piraxix’s hero ability so that there will be more allies for next Soul Reaper, of you can use it after hero ability to get more HPs (2-6hp).

NOTE: This was my earliest and first version of the deck which has evolved a little bit. There are quite a variety of ways a deck like this can be built. Other cards to consider such Meat Wagon which will generally always give your allies the +1/+1 stat boost, Dagger of Fate/Soulbound Armor for additional haste/board control damage, Mind Control for the allies you just might not be able to kill, Energy Discharge which combos nicely with a discarded Reactorary but unreliable combo to count on and Slingblade Demon which can give you a second use of the allies with on summon abilities.

Gravebone enthusiast until the day I die ....and beyond
View all posts by Buqs →
Tagged  elemental, piraxix, Shadow era, shattered fates.
Bookmark the permalink.