Human Mages are consistently one of the Top Decks of Shadow Era. Mainly they tend to be of the rush variant and they have tons of draw options to support this. Tome of Knowledge has consistently been one of the top draw engines for Mages for all expansions. Call of the Crystals and Dark Prophecies also used lots of Bad Santa and occasionally splashed Honored Dead as well as Treasured Heirloom. Shattered Fates brings a new tool in Amulet of Conjuring which really speed the flow of draw cards to the hand. In remains to be determined whether Amulet will remain in its current form or if it will receive some nerf as we move closer to completing the set.

HEROES:
•Nishaven – 5SE: All allies take 4 electrical damage.
•Eladwen Frostmire – 4SE: Target opposing ally takes 4 ice damage and is frozen (it can’t attack, defend or use abilities) for 2 turns.
•Aramia – 3SE: Target item in your deck with cost 3 or less is put into play, as if summoned at no cost. Shuffle your deck.
•Loest, Savior of Layar– 5SE: Target ally, item or ability is exiled (removed from the game).

HUMAN
•Fleet-footed Messenger (3cc – 1/5) Haste (This ally can attack and use ability in the turn he is summoned) 1: Target card in your hand is shuffled into your deck and you draw a card.
•Lily Rosecult (4cc – 3/4) When Lily is summoned, return the top item from your graveyard to your hand.
•Tainted Oracle (4cc – 2/2) When Tainted Oracle is destroyed draw 2 cards.
•Mystic of the Vale (4cc – 2/6) 2: Target attachment is returned to its owner’s hand.
•Nathanias, People’s Champion (7cc – 5/8) When Nathanias is summoned, draw a card: if that card is an ally, it is summoned at no cost; otherwise, it is discarded.

MAGE
•Undying Bond (4cc) The top 2 allies in your graveyard are placed into your hand, and your undead allies have +1 attack until the start of your next turn. 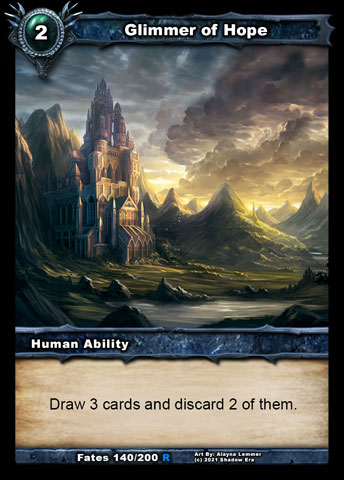 HUMAN
•Shrine of Negatia (1cc) Return target item with cost 4 or less to its controller’s hand.
•Retreat! (2cc) Put target ally back into its owner’s hand.
•Campfire Stories (2cc) All of your allies heal 2 damage. Draw a card.
•Disrupt Aura (2cc) Target attachment is returned to its owner’s hand, and the hero of ally it was attached to takes 1 damage.
•Glimmer of Hope (2cc) Draw 3 cards and discard 2 of them.
•Road Less Traveled (3cc) Target ally is returned to its owner’s hand: that ally’s owner draws 2 cards.
•Honored Dead (4cc) If you have at least 3 allies in your graveyard, draw 2 cards and your Hero gains 2 health.

NEUTRAL
•Word of the Prophet (1cc) Up to 3 cards in your hand are shuffled into their owner’s deck and then you draw the same number of cards.
•Bad Santa (2cc) Both players draw 3 cards, up to their maximum hand size.
•Melt Down (2cc) Destroy an item you control. Draw two cards.
•Master Smith (4cc) Return any weapon or armour from your graveyard to your hand.
•Ley Line Nexus (5cc) Destroy target item with cost 5 or greater. Draw a card. 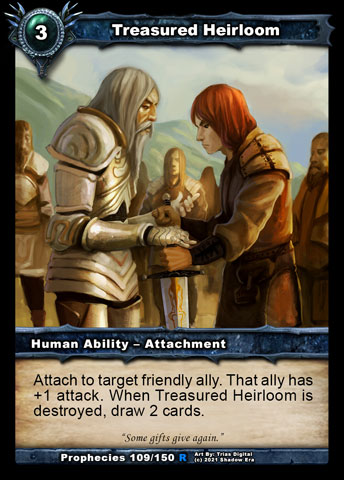 NEUTRAL
•Confluence of Fate (2cc) Sustain: 1HP. Attach to your hero. At the end of each of your turns, draw a card for each attachment you summoned that turn, to a maximum of 2 cards per turn.

HUMAN
•Scriptures of the Righteous (2cc – 4d) 1D: If an opposing hero or ally was dealt arcane damage this turn, draw a card.
•Twilight Eidolon (3cc) When a friendly Twilight ally is killed, that ally is returned to play and Twilight Eidolon is destroyed. 0: Draw a card if you control 2 or more Twilight allies. 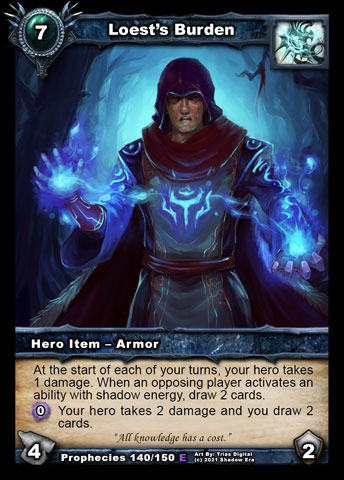