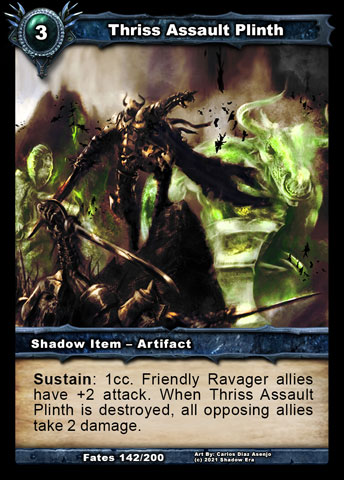 Currently there is only one card with Sustain: 1, Thriss Alamanac. This sustain cost is the easiest to understand, but the trickiest to play around. At the end of your turn, you will be charged 1 unspent resource as a maintenance cost to keep Thriss Alamanac in play. Generally decks are designed at maximizing the use of your resources on every turn, but in this case you want may want to leave resources available so that the card remains in play. You will have to take this resource cost into consideration for the turns you want to keep Thriss Almanac in play. If you keep Thriss Almanac in play for 3 turn you will have paid a total of 6 resources, the initial 3 casting cost, plus 1 resource for each of the 3 turns. Ravager builds are typically the type of decks that would play this card because of the +2 Attack that is Ravager tribe specific. When the cost can no longer be paid at the end of turn, Thriss Almanac will self destruct and deal 2 damage to all opposing allies, making it somewhat flexible to your game plan and providing a use outside of Ravager builds. Some favorable card pairing for this type of sustain cost are those that increase or renew resources, such as  Jeweler’s Dream, Feedback, Bounty Hunter, Twisted Familiar, and Slingblade Demon (Devoted Knight for Meltdown games). 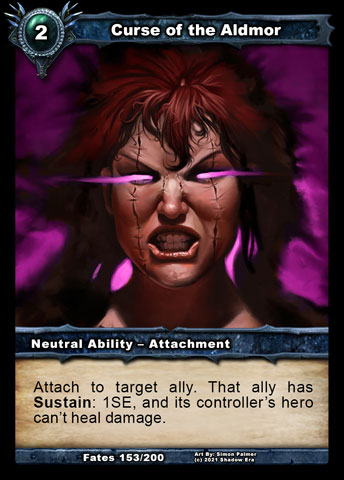 Curse of the Aldmor is the only card that currently exist with Sustain 1SE. What is unique about this card is that it ties the Sustain SE cost to the ally, meaning that if the SE sustain cost can not be paid at the end of turn, the ally will also be killed. This is an interesting ally removal card but you have to understand when is good time to use it within your desired strategy. If you want to attempt to lock out opponents net Shadow Energy gain, you would time either directly after an opponents use of ability or if they are 2 or more SE away from being able to use hero ability. Note this does not take into account any SE accelerators (Shadow Font, Aldmor Accelerator, etc). If you want to use Curse of the Aldmor as ally removal, then you will want to time it when you think opponent will be using hero ability (end turn resulting in 0 SE). This will mean at the end of their turn there will be no SE available to pay sustain cost and ally with Curse of the Aldmor will be killed. NOTE: If two Curse of the Aldmor are in play on controllers side, and there is only 1 SE left at end of turn, the sustain 1SE will be paid in Standard Resolution Order. The first Curse of the Aldmor (left most) will be paid first, the second (right most) will be unable to be paid and the ally it is attached to will die. If no SE is available at end of turn, neither Sustain costs can be paid and both allies will die. Favorable pairing with Shadow Energy drainers such as Priest of the Light, Radiant Sunlight, Shadowspawn, etc. 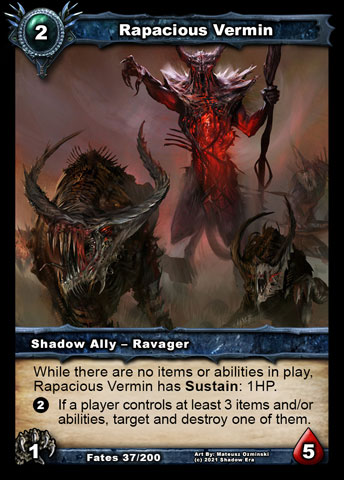 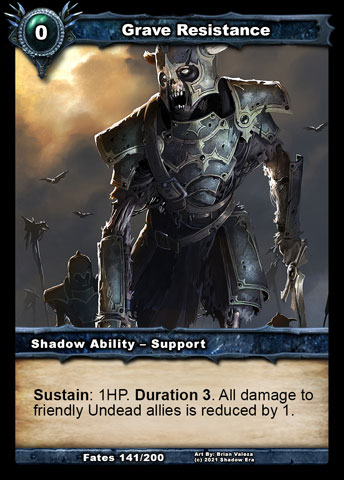 There are several cards that currently exist with Sustain: 1HP, Confluence of Fate, Rapacious Vermin, and Grave Resistance. The cost of unpreventable Hero HP loss is a very real cost that players often over look. One thing that stands out to me, is the low resource cost of these cards. The low summoning cost allows for the cards to be combo/playable in their own right, but also a overpowered if left unchecked. This low summon cost is offset by using Sustain 1HP as the additional cost. This 1HP is unpreventable damage your hero will take at the end of each and every turn as long as you have HP to give or the card enforcing sustain is in play. The HP loss taken over several turns is nothing to sneeze at. This HP loss over time could end up resulting in the reason you lost a game. Confluence of Fate is an interesting draw engine, resembling Blood Frenzy but restricted to draw only when attachments are played. You need to play enough attachments to be able to draw enough to justify the health loss. Rapacious Vermin is mostly a tech card, however, his high health puts him at the top of the food chain for survivability based on his cost, but the sustain cost makes this not a great card to want to be left in play for an extended period of time. Grave Resistance was one of the most talked about over powered cards in recent history. The next update 2.87 will adding sustain 1hp cost, which is a significant cost. Grave Resistance has a duration so at most you will take 3HP over the course of 3 turns for having this card in play. Games against an opponent using Grave Resistance usually see this card being chained one after another 2-3 times in a row, which could result in 6-9 damage over the course of a game which is approximately 1/3rd of a heroes starting health. This particular sustain cost is the most threatening to your heroes survival since when your hero gets to 0 health you lose. Favorable pairing are healing cards and cards that remove these cards with sustain costs.

Below is a few question and answers I found in the Card Ruling Section which I found very helpful:

Q: Should Guardian of Unaxio be able to prevent damage to your hero from Sustain 1HP caused by Confluence of Fate, when accompanied by another Templar?

A: The 1 health sustain cost on Confluence of Fate is a mandatory cost. It deals irreducible damage in the same way that mill damage you take from having an empty deck is irreducible. As such, Guardian of Unaxio will be unable to prevent the sustain cost damage with his ability.

I have a few questions about how Holy Shield should work in the following scenarios (I wasn’t able to test them):

A: Going forward, Holy Shield will be interpreted such that “can’t be killed” will mean your hero can’t drop below 1 health. We feel that a hero at 0 health should be dead regardless of Holy Shield, so it is more intuitive to just have your health stay at 1 while you have a Holy Shield attached. Holy Shield will now work kind of like a Shard of Power, but rather than a maximum of 1 health your ally/hero has a minimum of 1 health while it is attached, regardless of underlying health value. Given that interpretation, the answers to your following scenarios would be as follows:

1) Player A has 1 health left and Confluence of Fate attached to his hero. He casts Holy Shield and ends play. Player B has also 1 health and Blood Frenzy attached (or any other card that deals one damage at the start of the turn). So when Player A ends his turn, Player B goes to 0 health. Who will win? Player A because he can’t be killed while he has Holy Shield attached (although his health will be 0)?

1) Player A’s health will stay at 1 thanks to Holy Shield and Player B will die to Blood Frenzy.

2) Player A has 5 or less health, empty deck and Holy Shield attached. Player B has 1 health and any sustain card in play (CoF/Vermin). He plays All Hope is Losticon and ends play (he doesn’t have an empty deck). Who will win? Player A because his Holy Shield will be removed at the start of his turn, but Player B will have gotten the 1 damage at the end of his turn?

2) All Hope is Lost will drop Player A’s health to 1 (but not 0, since he can’t die) and then Player B will die to the sustain cost.

3) Player A has 1 health left and Confluence of Fate & Rampage attached to his hero. He casts Holy Shield and ends play. Player B has at least one ally in play and he kills at least one of them (e.g. sac lamb, supernova, tidal wave). Will Player A heal from the killed ally or not?

Thick Hide – The HP damage from Sustain 1HP is unpreventable so thick hide should not prevent this type of damage.

Gravebone enthusiast until the day I die ....and beyond
View all posts by Buqs →
Tagged  Expansion, Mechanic, Shadow era, shattered fates, Sustain.
Bookmark the permalink.