This deck has earned me high praise like “nice net-deck” and “looks more like just another player with a common meta deck”.  It also got me to a ranking of 324 in QM (though I’ve dropped a bit) and earned me the top place in both days of the  Europe/Africa Regional Championship (2014).  But in truth, it is a net-deck – well actually an adaptation of a deck that I already posted here (if others copy it, it becomes a net-deck, right?), which was loosely based off of watching BP Chamthabo play his excellent Serena deck (before he posted it). At this point it has morphed a few times, and while all the cards are commonly used Serena cards, I like to think that I’ve made it my own.  In my opinion, there’s no shame in copying, as long as you give credit where it’s due.  We don’t need to always reinvent the wheel. Sometimes we can just improve it or adapt it to fit ourselves and our situations.

What’s so special about this deck?  It essentially is a broad toolbox for Serena, with potential answers in small amounts to a wide array of decks and play-styles.  It has its share of weak matchups, but they’re usually slightly weak, and not auto-losses.

The key is a lot of excellent utility cards combined with a strong (for Serena) early game, and support cards aimed at sustaining the deck into the late game.

I think this needs some mentioning because many excellent Serena decks use Night Owl instead.  I generally consider both very strong cards, with slightly different advantages.  Night Owl is more efficient, but also more vulnerable and slower.  You don’t want Night Owl in games where the opponent is rushing and you need something down on T2.  It doesn’t help you then.  You also don’t want Nightshade when you’re trying to keep Night Owl cloaked, and so they don’t play well together in decks.  Generally Night Owl works for slower rogue decks with a higher resource curve, while Nightshade works (combod with Midnight Sentinel / Backstab / Assassination in decks with lower resource curves.  It’s not as good as Night Owl in many matchups, but the ones where it’s better are the ones that I need it for.  Nightshade / Sentinel makes this deck quicker and more 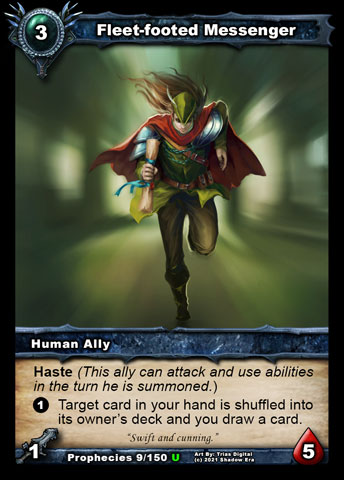 aggressive than most Serena decks.  This has the added advantage of giving me an edge against other Serena decks.  I can effectively death race Serena, out-controlling her in the early game, while steadily losing card advantage, and then finishing her off in the late-game.  Mirror matches for me are not just luck, I actually win by having the better-suited deck (that may change after you all copy me though).

I’ve already talked about why I love this card in another article.  It’s here to complement Nightshade and to buff allies so that they can survive a supernova.  As a bonus, I can combo it with backstab to get that +1 attack bonus on other allies.  That often comes as a surprise to opponents who thought that my 2/5 spirit warden couldn’t possibly hurt their fatty.

The haste is excellent, as is cycling cards and being able to pull off hasty assassinations / backstabs.  I only have a couple in here because they’re tech, just like those Spirit Wardens.  I don’t always need them, but when I do, I’m glad I have them in deck. It took me a while to understand this card’s value. It may take you some time too, that’s ok.  I recommend keeping a few copies in a deck for a while, and it will start to grow on you.

I originally had a few copies of Wily smuggler in this deck, and while this allowed for some occasional strong turn 4 combos, it was not nearly consistent enough in this deck to be worth it.  Spirit Warden on the other hand does a variety of useful things, it has steadfast, which safely removes snare traps.  It exiles allies from the graveyard, limiting healing by elementals and kills Gravebone’s Dakraths for good.  It stops the Bloodpack Shaman or Shadow Knight loop and lets you exile them while you’re at it.  It’s relatively hard to kill, which can either leave you with an ally to use assassination/backstab on or at the very least prevent a good amount of damage to your hero.  All in all, this serves as excellent utility in a variety of matchups. 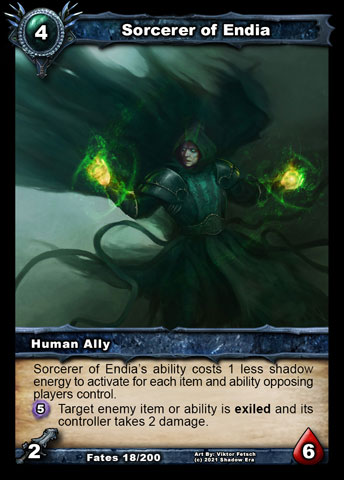 These are very helpful against decks with a lot of items, or decks that rely on attachments.  It is a counter to millstalker, but also Vess and Skervox.  Against warriors other than Vess, it can take out Blood Frenzy, which can win you the game.  It can also lead to some great surprises when taking out crippling blows or weapons.  The combination of excellent utility and versatility is great.  Less important to me is the respectable attack.  Usually I don’t even play them if I think that’s all they’ll contribute, still it’s nothing to sneeze at.

This can be very useful in cases where you are getting overwhelmed and black garb just won’t cut it.  I used it to great effect in two games vs BP Emigor and his discard Zaladar deck in the regionals.  It’s not great in every matchup, but when it is, it’s the best.  It’s also potentially strong vs Victor and mages (either a rush, or Gravebone).

This is of course a great card. It’s often very strong on turn 5.  The trick to playing Serena well is to recognize that it’s not always the best card in your hand.  There are many situations where Anklebreaker is a much better choice.  I even resourced the only cutlass in my opening hand in one or two games, because I knew I’d need Anklebreaker first, and cutlass would be a finishing card.  If you’ve got 3 shadow energy, cutlass will steal you 1 card.  If you hold back and play it later in the game, after saving up shadow energy, then it will steal you multiple cards and help you control the board at the same time.  On the other hand, it can give you a nice boost on T5 as well.  Other times, you only play it to take out allies with black garb, because you want to mill your opponent.  The trick is knowing when it is the ideal tool and when it’s not.

I do want you all to know that I video recorded my perspective of all of my matchups in the regionals.  My goal is after the WC is over, to release them all with some commentary talking about what I was hoping to achieve, why I resourced each card, etc.  My goal is to help the player community better understand Serena so that we can keep coming up with great deck ideas together, net-decks and all.

Well, now that WC is over and I placed in the top 8, I think it’s time to post some videos!  In the next week or so I’ll upload my regionals videos with commentary.  Unfortunately something went wrong with my video recording software in the final tournament, and I only have video for a few games, and not the ones I would have liked to talk about (the ones I lost).  Those videos are available by the way from Gondoriandotcom ‘s twitch channel, although they’re not from my perspective, so you won’t see my own resourcing choices.

But everything else is going up!  See below and stay tuned, this list is going to grow.

Here are some final thoughts about this deck now that the competition is over: This deck’s strength lies in its versatility.  It is able to deal with any threat, in small amounts.  That is also its weakness.  When an opposing deck goes overboard with a particular strategy, such as weenie allies, rush, fatties, etc.  Then this deck winds up having problems.  It runs out of answers.  I have 3 assassinations in the deck, but if a Zhanna deck is dropping Aeons every turn, they won’t do me enough good.  I also have a lot of weenie cards in there but a lucky rush will still get by me and win.  This deck depends on a meta that is balanced, where each deck tempers their win condition with cards intended to make up for their weaknesses.  In the first set of games, you see me against KA Final Rain, and while he certainly gives me some problems with those shriek of vengeances, once I know they’re there, I play around them and am fine.  If his deck were just a bit more reckless and completely aggro, it would have been more problematic for me.  It also would have been weaker against other matchups.  So KA Final Rain, by bringing a well-rounded deck to a tournament – a sensible move, wound up being well-matched to my Serena deck.  Similar things can be said about most of my opponents in this tournament, they brought well-rounded decks because they wanted to be able to win the tournament, which made my deck a potential counter to them.  This deck happens to be very well suited to high levels of competition because those are the places where you run into well-rounded decks.  It performs less well at low levels of play, for example, in low-ranked quick-matches, because that is where you tend to see extreme decks.  Those extreme decks are not generally competitive, but they’re strong in certain matchups, and this winds up being one of them.  So if you’re struggling with this deck and you are ranked below 250, don’t necessarily blame yourself…it may be the matchups.

This brings me to my losing match vs A1 Sisyphos.  Sisyphos brought a deck that was extreme in a weird way.  It had extreme weapon/armor destruction (4x Weevil-tipped Crossbows + Ley Line Nexus + 4x Rapacious Vermin) alongside extreme shadow energy hate (4x Disciple of Aldmor). What it did is double down on the mid-range strengths of stopping rushes and controlling the early/mid game, with absolutely no protection against late-game control. He understood that midrange>rush>control>midrange, and nobody was playing control, so an extremely focused midrange deck would be king. There are no A Perfect Shots in that deck, which makes it potentially very weak vs certain decks, like a Fat Zhanna, or really any fatty oriented deck.  I believe that A1 Sisyphos took an educated risk, realizing that no one was running those types of decks in this tourney (although I had really been considering bringing a 60 card Zhanna deck to the finals-and part of me regrets not doing that), and so this deck would be particularly strong in this setting.  He made the correct meta-call, and because his deck was so extreme in both item and weenie hate, my deck had no chance against it.  So to summarize, this Serena deck did well in the tournament because it is well-rounded and does well against other well-rounded decks. This makes it an excellent deck for high rated Serena players as well as tournament settings. It does less well against extreme decks, particularly ones that excel at countering weenies and items, or decks that are excessively aggressive with large allies.