I apologize for the lack of content. I had a huge amount of writer’s block and also some real life stuff I wanted to get over with first.  Without further ado. 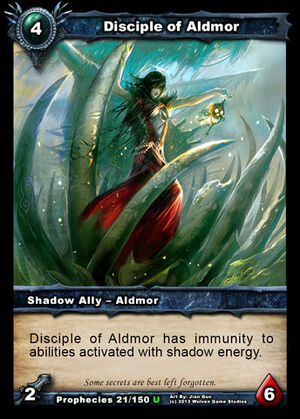 Disciple of Almdor was the first ally released in the Almdor tribe, and was released back in Dark Prophecies. This bad girl sports a solid 6 health making her one of the more tougher allies to kill, with the additional of immunity to Shadow Energy based abilities. Her appearance in Sisyphos’s World Championship winning Deck List also brought her back to the spotlight. 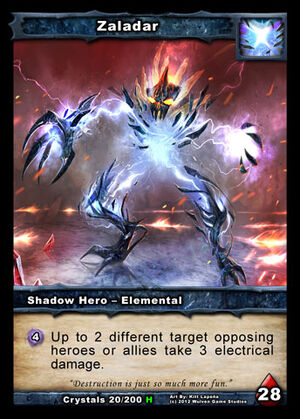 Disciple of Almdor is a very solid Tech against the likes of heroes like Zaladar, Banebow, Loest, and Boris who rely on their Shadow Abilities to help deal with the board (Although each to a different extent and level). Her ability forces them to use alternative means to get rid of her, or just ignore her all together. If they try the latter, it will be able to sneak in 2 damage at a time, which can add up. Now of course, they do have cards like Crippling Blow, Mind Control, Yari Marksman and The Perfect Shot that can quickly dispatch her, but better have her take those cards and be a bait or distraction than have them affect your more valuable allies. Now with that being said, I say it is pretty obvious why Sisyphos chose to run 4 copies of this in their Deck. With heroes like Victor, Zaladar, Banebow, and Loest, in my opinion, probably being some of the best heroes going in, it is no surprise they would run one of their greatest nuisances. 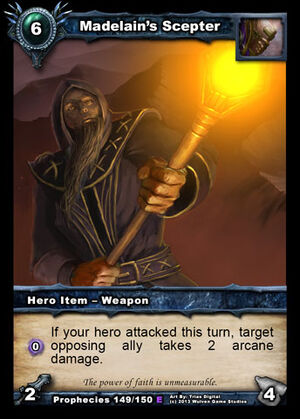 heroes, she is also immune to ANYTHING that is activated with Shadow Energy. This includes artifacts, ally abilities, and weapons. Now although most of them are not relevant in higher level play, you may still run into them in the chaotic nature of Quick Match and in rogue decks (Rogue decks I am referring to in this case are decks that are not considered Meta, but have favorable match-ups or strengths against it, not the class deck). Some examples of non-Hero cards this is also immune to include  Madelain’s Scepter, Punisher’s Gauntlet, Venonflame Archer, Spirit Shuriken and Urigon’s Fang.

Some final notes on this card. Remember that this card affects ALL abilities activated with Shadow Energy, even friendly ones. In cases like this, it CANNOT be buffed by cards like Elementalis or Plate Armor. You should also remember that the Shadow Ability doesn’t have to directly affect it in order for her immunity to kick in. As long as the ability that will affect her is activated with Shadow Energy, she will be immune by it. So if Logan uses his ability and strikes her with his weapon, she will just take damage and not be killed. Similarly with Threbin, where entering combat with him after his ability was activated results in her taking no damage.