Hi, there! I’m Unicorn Johnny, and I’m here to talk you through some deck brewing that I’ve been doing recently. I hope you enjoy reading this article as much as I enjoyed putting it together.

Step One – Choosing a Root

As you might guess from the “Johnny” in my name, I get most of my TCG enjoyment from creative deck building.  I go out of my way to avoid using established decks and instead spend my time looking over all the overlooked cards in the game, seeking out potentially powerful cards that haven’t yet become known to the masses. 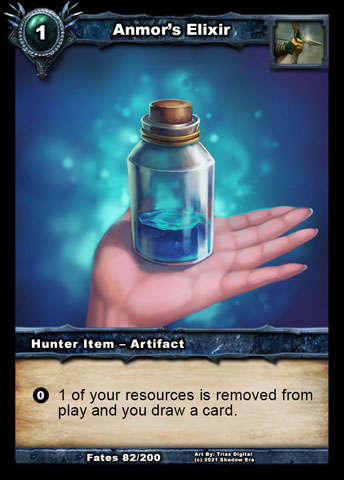 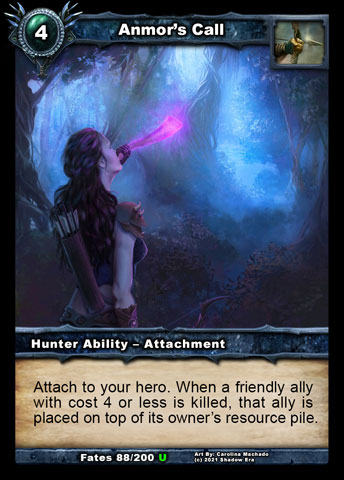 When I find one such card, it becomes the Root of my Brew. At this point, I will of course have no clue if I’ll be able to make a viable deck with it, but we can’t brew without a root, and brewing is the most fun part, so we take the risk and see where it leads!

Important Note: If the chosen card appears to rely heavily on one or more other cards, then those cards also become part of the Root.  Providing at least one card in the Root has not yet become established as viable in the meta, it qualifies for a Unicorn Johnny Brew!

This week, I’ve chosen to have Anmor’s Exilir and Anmor’s Call as my Root. Why? Because together they have the potential to give Hunters a huge amount of unilateral draw for practically zero cost once the latter is working its magic.  The challenge is in finding what cards to put in the rest of the deck and that’s where the brewing comes in!

Once you’ve got your Root, you need to evaluate the rest of the available pool for compatibility with whatever potential power your Root has.  Since both Anmor cards here are Hunter cards, our search space has already been narrowed for us!  Our search space will get further narrowed when we decide whether our hero will be Human or Shadow, but we can’t make that decision until we’ve explored some cards that can work well with the Root.

But where does one start in a pool of 190+ cards that can be used in Hunter decks?  Well, in the case of this Root, which is all about cheap unilateral card draw, made possible by the daisies pushed up by our dead cheap allies, we need to consider something incredibly important: HOW WILL THE DECK WIN? 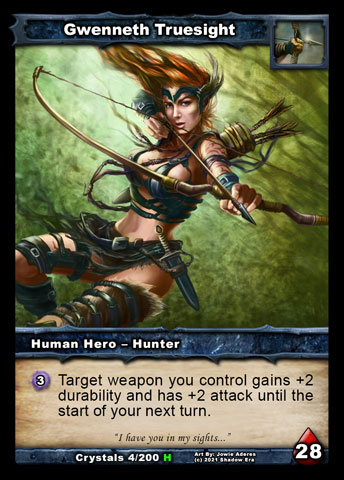 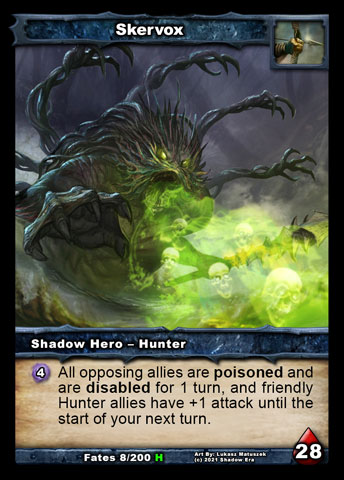 In line with my goal to be as different to the norm as possible, let’s start by considering the least played heroes: for Hunters, I think that gives us Gwenneth and Skervox.

But Skervox’s ability does not directly imply a win condition, so we’ll start with Gwenneth, who is capable of hitting the opposing hero directly with lots of  combat damage once she’s set up.  Yes, that will be our end game!

With a Hero and win condition chosen, we need to add cards that are going to work well with both.  Since combat damage to the face is our goal, we have to add some weapons!  I’ve chosen to use a playset of two 3-cost weapons – Feathered Longbow and Weevil-tipped Crossbow (which should really be classed as a Bow, so let’s hope that’s fixed in v2.87!) – and three copies of the 4-cost shapeshifting weapon, Beetle Demon Bow. 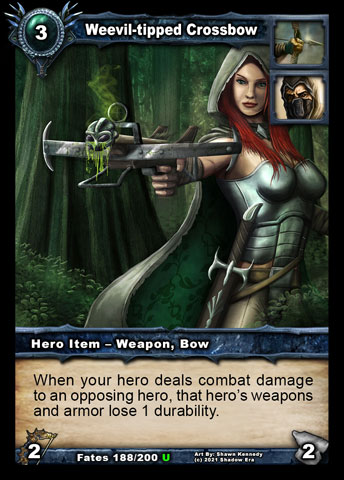 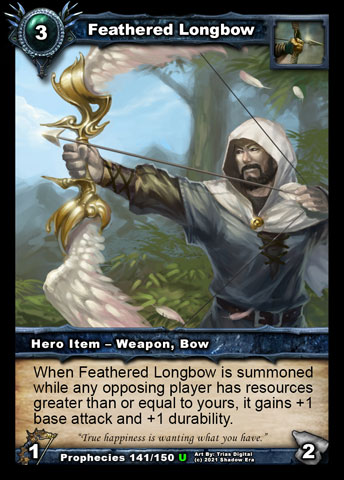 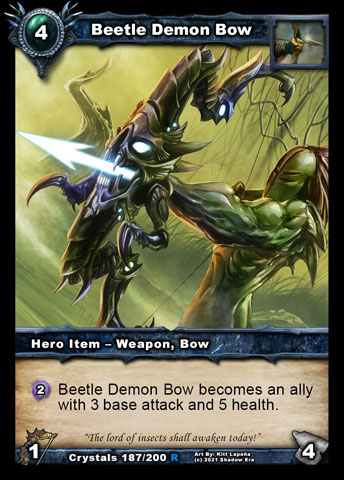 You’re probably thinking these choices are quite unconventional, so let me share my rationale for them: firstly, each of these cards does something related to my Root and my win condition, which I will cover in a minute; secondly, I enjoy brewing, so I’m naturally going to explore less obvious choices to increase the chance of finding something new and exciting!

Let’s start with Weevil-tipped Crossbow!  This strangely named card is one of only three 3-cost 2-attack 2-durability weapons in the game at this time. This makes it very efficient for our needs. (Incidentally, the other two are not available to Hunters and both have a drawback when summoned.) The added bonus is the triggered ability that chips away at opposing armor and weapons, which should be useful when we are going directly for the hero.

Next up: Feathered Longbow!  I chose this card because it can conditionally provide better stats than Weevil-tipped Crossbow, particularly if you are going second or you have a draw engine that depends on removing your resources!

Finally, we have the more expensive weapon, Beetle Demon Bow, which has only 1 attack, but the option to convert to an ally for 2 shadow energy.  The key here is that it will become a resource when killed if Anmor’s Call is out, thereby allowing our draw engine to continue working.  We probably won’t use Gwen’s hero ability in the early game, so having an alternative use for her shadow energy is also nice.  And even if we never plan to convert it, the opponent doesn’t know that and has to perform extra calculations each turn to work out the different scenarios they could face!

We probably want allies costing between 1 and 4 resources, so they can work with Anmor’s Call.  Since we’re planning to get a late-game win, and we get some benefits from our allies dying when Anmor’s Call is out, let’s consider only the most threatening allies we can find, to encourage the opponent to go for them and not us!  The opponent is then damned if they leave them and damned if they kill them! 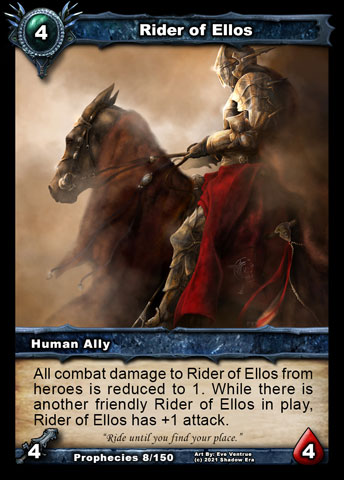 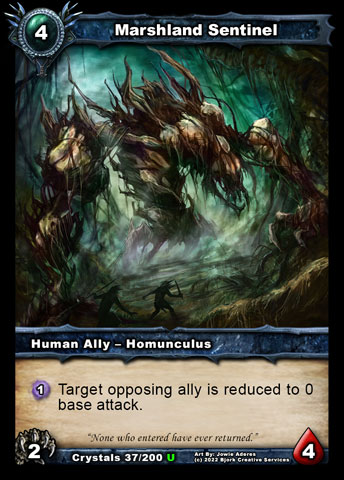 First up: Rider of Ellos.  He has 4 attack for 4 cost and he’s a pain to get rid of with weapons.  This means that he should keep opposing allies and opposing abilities out of our face for a while.  If he doesn’t, he will be hitting hard.  Since he costs 4, we’ll just add 3 copies to ensure a better chance of a decent T3 play.

Next up: Marshland Sentinel.  He has only 2 attack for 4 cost, but his ability is very powerful.  If he sticks, he will make an impact on the board, even if he’s got a Crippling Blow or Zail’s Hymn on him.  We’ll take 3 of those as well.

Onto 3-cost allies now! Little-known fact: Of all Human heroes, the Human Hunters have access to the most 3-cost 3/4 allies, thanks to Jade of the Forest and Venomflame Archer being in their pool.  Those two join Jasmine Rosecult and Gaderi Barbarian in the Human pool to give us up to 16 allies with those stats to use.

But if we take all of those, we hit 41 cards total already!  Surely that’s too many!

Well, no, not at all.  We’re brewing here.  Specifically, we’re on the Blend phase, where we’re looking at all potential ingredients for the Blend and not too worried about how big the deck gets yet.  If you’re about to stop reading due to the sheer idiocy of this, please believe me that there’s a later phase where we trim cards down. I promise!

OK, with that covered, let’s continue Blending!  To get the best value from Gwen’s ability, we’re going to need a way to shoot twice in a turn.  That means we need some Rapid Fire and/or Snowland Spotter.  Since the latter can also help with Anmor’s Call, we’ll go 2 Rapid Fire and 4 Snowland Spotter, bringing us to 47 cards.

At this point, we’re very much allowed to add in some cards that are staples for our chosen hero. (I hope you will agree that most of the cards in the Blend are quite a departure for Gwen, and will catch the opponent by surprise!)

Since we are seriously lacking 2-cost cards, we’ll add some. Specifically: 4 copies of the fantastic Snare Trap, for slowing down our opponent’s board claim; 2 copies of the brand new trap that’s seeing a lot of play, Decoy Trap, which will help keep our threatening allies on the board; and, finally, potentially the best Hunter card in their entire pool, Hunter’s Gambit in 4 copies, since that will help finish off any allies above 4 health that we run into and provide some draw.

Since we’re planning on having our allies die and hoping to survive til late-game, I’m also adding 4 copies of Wrath of the Forest to exploit and help with both, respectively. But we’re at 61 cards now, which is ridiculous, so let’s cut some cards out, bearing in mind what we’ve added just now.

As you can see, I decided to cut some of the more unconventional 3-cost 3/4 allies and some of the 4-cost allies. My rationale here was that Jasmine and Rider of Ellos were the most threatening, so I wanted to skew the deck more towards them, meaning 2 Gaderi Barbarian, 2 Jades were cut, and 1 Venomflame Archer and 1 Marshland Sentinel were cut. Finally, since I still had so many threatening allies in my deck, I figured I may not even need to kill with Gwen’s ability to the face after all, so one Snowland Spotter was dropped as well.

54 cards is still a huge amount, but remember that we’re planning to use our allies as meat shields and just survive til late-game where Gwen can hit hard to the face. We don’t really have any specific cards we want to see on T2/T3/T4, so a tuned 40-card deck is not needed … I think.

It’s time to turn up the heat and throw yourself in the deep end. In other words, it’s time to playtest …

Since 2.86 has only just hit, I’ll be taking this Brew for a spin for a couple of days and then return back with my findings …