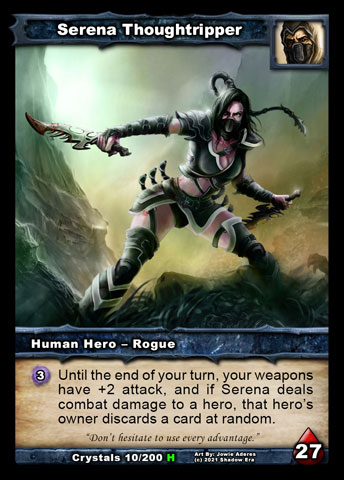 Among rogues, Serena excels at developing card advantage and limiting opponent options. There are very few ways in Shadow Era to force an opponent to discard a card from her/his hand; Serena’s Shadow Energy ability is by far the easiest to use and most consistent of these. Her ideal scenario is one in which the opponent has few cards on board and has no cards in hand, so that they can only play the cards they draw each turn (also known as top-decking). Accordingly, Serena often does best when destroying card draw engines to establish such a lock. Shattered Fates has given every hero access to excellent and varied card draw options, which makes it much more difficult for Serena to establish a complete lock. On the other hand, Serena also has more options, such as Thoughtripper’s Cutlass, which is difficult to consistently use well, but can give Serena a terrific card advantage and access to opposing card pools.

The challenge to playing Serena and what makes her so unforgiving to new players is that she has a few very strong tools that are each easily countered.  Black Garb, for example can kill two enemy allies, but can easily be destroyed by item destruction, a weapon, or by an ally with 1 attack (who therefore does no damage to Serena and doesn’t get killed). Using it requires Serena to take damage, so relying on it can get her killed. Night Owl is a very strong ally with terrific abilities, but can easily be removed by cards like Death Mage Thadeus, Murderous Hulk, and any number of cheap ally removal cards and abilities.  Serena’s ability is strong, but relies on weapons, which can easily be destroyed, and may not always be available when you need them.  Knowing when to use each card and when not to is the key to winning with Serena. Nothing that she does is simple or without risk, which makes her a challenging hero, but also rewarding to play.

One of Serena’s old weaknesses was that she tended to be a bit top heavy.  Because she could only have a few allies in decks with all her items, those allies needed to be tough to kill.  This forced Serena decks to be slow, as they needed expensive allies.  New cards such as Wily Smuggler and Midnight Sentinel make cheap allies tougher to kill, and cards like Backstab allow those cheap allies to hit above their weight.  These changes have produced quicker Serena decks in SF that combined with additional draw from Thoughtripper’s Cutlass have made Serena highly competitive as of 2.86.

COMPARISON TO OTHER ROGUES:

LANCE: All rogues rely on having allies on board to some extent. Lance’s ability helps to retake the board when it is lost as it makes allies able to have an immediate impact, and protects them for a turn. Serena has a difficult time retaking the board when it is lost, and often needs to use allies that have stealth, are difficult to kill, or have haste in order to retake the board when it is lost. This tends to make the options of competitive allies for Serena somewhat limited when compared to Lance. New allies in Shattered Fates, like Der’kan, the Bone King and Murderous Hulk have made this more problematic, as they can easily kill most stealthy allies. Alternatively, Serena may use items to clear the path for allies, however this is situational. Thoughtripper’s Cutlass may also steal excellent control cards from opponents, which may aid in ally placement, but again this is situational. Serena’s ability does offer advantages over Lance, and the main one is the early elimination of threats and options for opponents. Lance may play Raven on turn 5, and use his ability to give it haste and nullify an enemy ally. However the opponent may respond with a Mind Control or Tidal Wave.  Serena can potentially steal or discard that Tidal Wave or Mind Control, eliminating that future threat, but she may eat some damage from an ally that she left standing while doing that.

GARTH: All rogues have access to some excellent weapons which encourage a hybrid style of play. Garth’s ability takes advantage of this by working with allies and weapons. While Serena is able to buff a weapon to 4 attack easily to take out an ally, she falls short of the 5 damage that is necessary for many of the new SF allies. With a weapon, an ally or both; Garth is superior at controlling the board. Serena’s most optimal use of weapons is attacking the opposing hero. In this specific instance she is superior to Garth. Indeed, versus solo decks, Garth often has absolutely no use for his Shadow Energy. Likewise, Serena’s ability to force discards or steal cards lessens her need to exert board control (If I made you discard it, I don’t have to kill it). However, when Serena falls behind in board control, she doesn’t have Garth’s flexibility to take it back. Serena does use Fan of Blades better than Garth, and can use it as a form of pseudo-board-wipe when faced with many weak allies (as she can attack 4 times and do 3 damage to each ally). 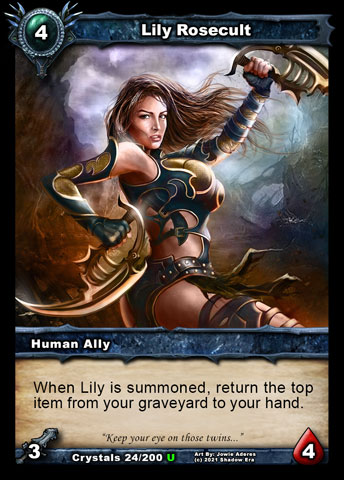 Call of the Crystals 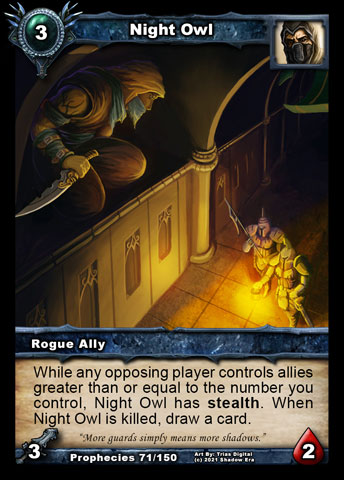 Call of the Crystals

On that note: enjoy playing Serena!

Thanks to Cosmic Giggle, Chamthabo and Heidrek Rampant for some helpful contributions to this post.

BobRoss has been using the pseudonym (based on the television painter, Bob Ross) since he first got AOL in 1993. He's got a Ph.D. in Clinical Psychology and has been an avid video game player and computer user his whole life. He used to love Magic The Gathering, also way back in those AOL days, and has been playing Shadow Era almost since its inception. He has been mostly a casual gamer, but recently took a more active role in the community with several articles on Shadowera.net and by participating in the World Championship tournaments, where he earned the title of Regional Champion for Europe and Africa (although he lives in New York).
View all posts by Bob Ross →
Tagged  discard, Hero Profile, rogue, Serena.
Bookmark the permalink.