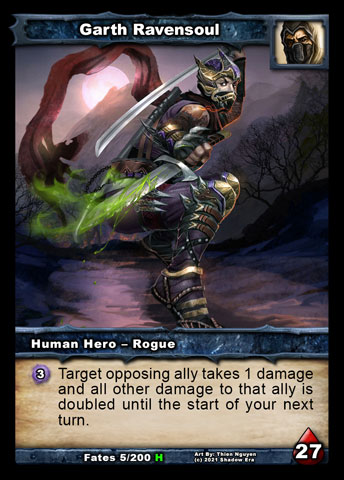 Garth’s gameplay is actually very similar to Victor and Logan.  All of them excel at killing allies and make their cards much more powerful by comboing with abilities.  Unlike Victor and Logan, Garth’s ability can be used more frequently, and although not quite as powerful as Victor’s/Logan’s, it is much more versatile, as it combos with every ally and weapon (and damaging ability).

Garth’s ability makes him excellent at contesting and taking the board in the early game. It then allows him to hold it effectively, even with only one or two allies out at a time.  This is particularly important in matchups where a swarm of allies may be destroyed by Tidal Wave or Supernova.  By being able to hold the board with just two allies and a weapon, Garth can minimize losses to board clears and quickly rebuild.  Over-committing to the board when wipes are possible is problematic for any hero, but is unnecessary for Garth.

Because Garth can make any ally able to hit above their weight, he is very flexible in his choice of allies.  Essentially any ally has the potential to be useful in a Garth deck.  He is also able to make much better use of utility allies than other heroes and rogues.  Cards like Layarian Diplomat, Midnight Sentinel, Sword Thief, Fleet-Footed Messenger and Layarian Seductress all have excellent utility and mediocre stats.  However Garth is able to make those otherwise mediocre allies competitive in combat.  Therefore Garth does not need to balance between utility allies and combat allies the way that other heroes do.  He can do both with the same allies. Those utility allies are what make decks well-rounded and able to take all-comers, giving Garth the potential to be very balanced and to carry counters in abundance.  Incidentally, BP Shadow Mann was the 11th ranked player for some time while playing an 80 card Garth deck.  The reason he was able to do this is because he understood that as long as he had solid draw and consistently had allies with good utility, it didn’t matter as much which ones he drew.  He didn’t need a specific combo to present a consistent threat and board presence, he just needed a steady stream of utility allies.

COMPARISON TO OTHER ROGUES

Lance excels at reclaiming the board when it is lost. He and Garth can both control the board with allies, but whereas Lance requires allies with powerful abilities or stats (in conjunction with some assassination) to control the board, Garth can control the board with weenies.  The challenge for Garth is that he needs to be able to reclaim the board after going second, or losing the board to an opponent, and relies on ally abilities to do so (haste, stealth, disabling or armor/stats).  Lance can get his allies on the board but requires ally abilities to keep control such as Jasmine Rosecult or Raven.  Both can compensate for some limitations of allies, but they are different limitations, so each go better with different allies.  Armored Sandworm, for example has excellent synergy with Garth, as it stays on board and can kill allies with 5hp (with help from Garth), he is much less useful in a Lance deck, as he is only an extra 2 damage, which is not optimal.  Raven on the other hand is excellent in Lance decks as she can incapacitate at least one ally, and maybe multiple ones, however she has little synergy with Garth – aside from saving him some shadow energy.  In a Garth deck, I’d much rather play two Night Owls in a turn than one Raven, as either can kill a weenie on their own and with Garth’s help; kill a fatty, and I get card advantage if they die.

Serena excels at card advantage.  With recent changes to Thoughtripper’s Cutlass, she has once again regained her crown in that respect.  Garth’s advantage over Serena lies in his ability to enhance either allies or weapons to keep the board clear.  He is much more versatile with ally removal, and can make much better use of Garth’s Concoction than other rogues.  Similarly allies like Layarian Diplomat wind up being effective substitutes for targeted ally removal, as any ally with 3 attack can be boosted to take down any monster with 7 or less hp and diplomat can take away armor and stealth to make this possible.  Garth’s versatility makes him much more well-rounded than Serena, and generally more consistent and easier to play (although there are certain matchups, like Praxix where Serena can really excel).

PRO-TIPS (not that I’m a pro or anything)

Garth’s ability is strong, don’t waste it.  You wouldn’t normally use an assassination to kill Puwen, would you?  The same applies with Garth’s ability.  You want to be able to use it to deal with large late-game threats.  It may be necessary to use it once in the early game to take the board, but afterwards, you should try to use your allies to their best effect to preserve some shadow energy.  You do not want to have to deal with a Nathanias without any shadow energy.

Utility allies are your friends.  I already mentioned this, but it is an important thing to know with Garth.  Utility allies are strong in general, but they normally need to be supplemented with fatties because the fatties are the only way to deal with opponent fatties.  Garth does not have this limitation, and so you can abuse utility allies with him.

Like Sir Mix A Lot, Garth likes big butts. Big butts in this case refers to the health on an ally (rather than the attack).  Since Garth can make allies with weak attack threaten all allies, the most important stats on allies are anything that makes them survivable.  This can include health, armor, stealth or any other defensive abilities.  Although most opponents have a few cards that will kill anything, those will quickly get exhausted if you can present a stream of hard to kill allies.

Garth is King of the Hill.  A control style works the best for Garth. While aggressive strategies can work in the right circumstances, you generally want to keep the board as locked down as you can when playing Garth.  Don’t give up the board if you don’t have to.  That being said, if you have lethal damage, or are close to it, you can always ignore opposing allies and go for the hero.

There are several cards that I have already described in some detail in my Serena profile, as they’re generally useful for rogues. I’ll mention them briefly, but will focus more on cards that have specific and interesting uses for Garth here.

Buqs was so diligent in making a comprehensive list of all draw engines available to rogues, so I will link it here. Check it out if you want some inspiration in your deck building.

Call of the Crystals: 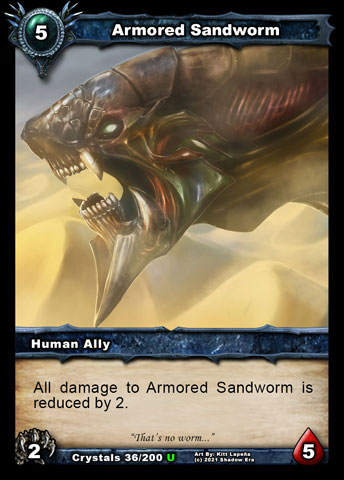 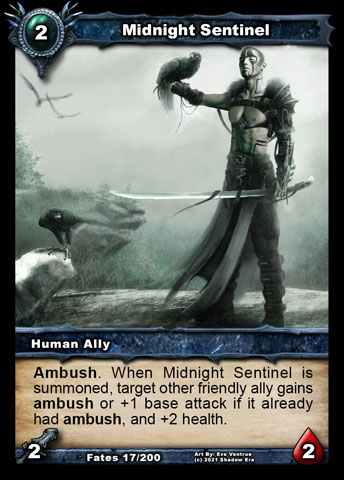 Call of The Crystals:

So there you have it! Enjoy playing Garth, and good luck staying King of the Hill!