Follow Alzorath in a series in which he will be post-commentating interesting matches related to a number of decks for a variety of purposes (and maybe even a rare meltdown match) – whether they be for Shadow Era Deck Techs, or for personal exploration into theories and concepts involving trends (or even anti-trends, such as disused card types). Check out more Shadow Era videos at Alzorath’s YouTube channel.

This deck is result of an effort to find alternative ways of playing Bloodfang. In QM and tournaments he has been mostly used as pure ally based Wulven deck with pretty straightforward strategy of swarming the board thanks to his ability and synergy between Wulven tribe allies. However if you draw a parallel between his and Baduruu’s ability you can see that in its nature Bloodfangs ability is also a tempo boost as it can save up to 8 resources per turn (Howlfang + 3cc ally for example). This lead to me believing it is also possible to make  a Bloodfang deck that would mimic Baduruu’s Resource Destruction.

IRC stands for Internet Relay Chat. In lack of better in game chat Shadow Era players use this to communicate with other members of community. It is handy for sparing, tournament matches or just chit-chat. This guide will show you how to join Shadow Era related chat rooms. Continue reading 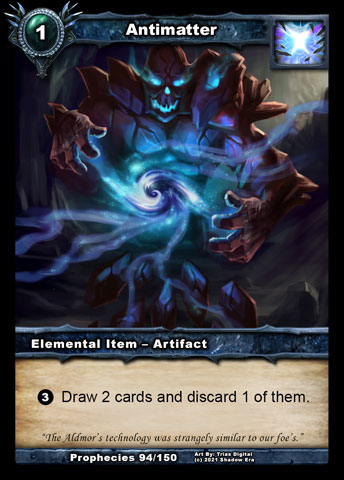 Still, lack of draw was apparent and with Dark Prophecies they filled that hole in strategy with Antimatter. If you compare it to other draw engines in game at that time it was most expensive one. Gain of one card for 3c is really expensive, and only synergy with discards had Soul Reaper and some gimmicky stuff like discarding attachments for Xar Modulator. Cost of discarding a card was real cost back then and that was the reason many deck builders were reluctant to rely on it and still went on burst draw route. Continue reading