This is a deck made by Maxi1230 (who gave me permission to post it here), and originally posted on the community forums. Although it certainly appears to be a gimmicky deck at first glance, it can be fairly competitive in many matchups, and really brings a unique play-style to Lance.  It’s a fun and refreshing change of pace, and makes for some really interesting and crazy games. 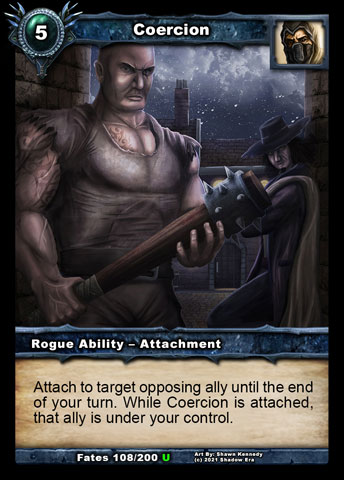 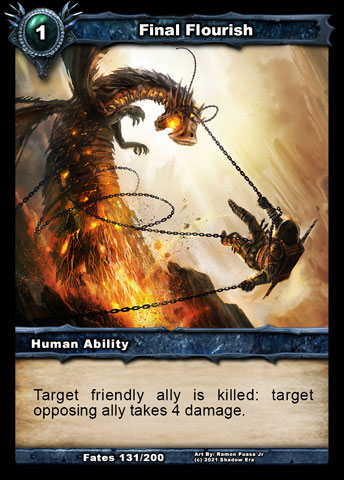 The key combo in the deck is Coercion + Final Flourish.  By using the two together you can use an opposing fatty, and then kill it to do damage to another opposing ally.  The combo makes me cringe as such a waste of cards and resources, but it actually sort of works in this deck.  First of all, it can potentially trade 2 cards for 3.  By taking an opposing fatty, using it to kill an opposing ally and then using final flourish to kill a weenie, you can gain a card advantage. The key to making this combo worthwhile and consistent is other cards in deck that support the combo.  For example, Zailen Crusader makes Coercion cheaper, while Confluence of fate offsets the wasteful use of cards by giving you draw for playing coercion. 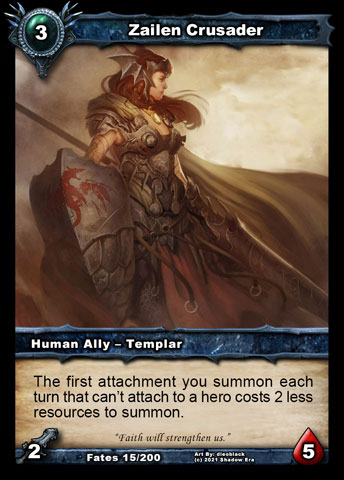 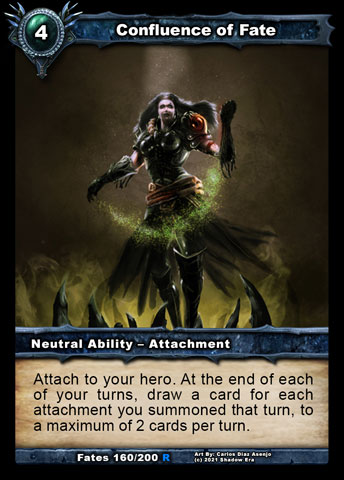 There are other useful synergies in this deck based on the advantages granted by Zailen Crusader and Confluence of Fate.  Essentially any of the attachments double as a draw engine, and with Zailen in play can be free.  Backstab, for example is already a great and efficient card, but with both of those cards in play it gives you two cards and costs nothing.  The drawback of using confluence of fate is health loss, which is partially offset by Crimson Vest and strong offensive combos (such as Irina + Backstab).

Silent strike may appear useless, but remember that it is your draw engine and it is often what keeps Zailen Crusader alive long enough to power some of those other combos. For example an ideal opening would be:

I personally was hesitant to play this deck, but played against Maxi1230 while he was using it, and he really gave me a run for my money.  I eked out a win in the end, but it was close and he really convinced me that this is more than just a trick deck.  I’ve also watched several of his games with it, and the deck seems to work consistently. I’ve tried it myself a few times, and while the style is weird for me, it’s certainly not weak. So if you want something different and fun, I recommend you give this a try.

A few notes – since this is an attachment oriented deck, other attachments may be useful as well.  For example, A Legend Rises can offset the risk of unique allies being disabled by attachments, while also providing some draw through Confluence.  Similarly changing the number of treasured heirlooms can provide some extra draw if needed.

BobRoss has been using the pseudonym (based on the television painter, Bob Ross) since he first got AOL in 1993. He's got a Ph.D. in Clinical Psychology and has been an avid video game player and computer user his whole life. He used to love Magic The Gathering, also way back in those AOL days, and has been playing Shadow Era almost since its inception. He has been mostly a casual gamer, but recently took a more active role in the community with several articles on Shadowera.net and by participating in the World Championship tournaments, where he earned the title of Regional Champion for Europe and Africa (although he lives in New York).
View all posts by Bob Ross →
Tagged  attachment, Backstab, lance, Shadow era, shattered fates.
Bookmark the permalink.